Discrimination against women highlighted during campaign in Surendranagar 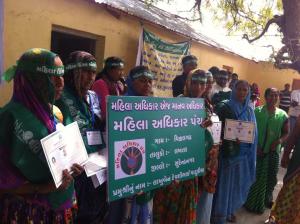 Navsarjan Trust, in alliance with Gujarat Women Rights Council (GWRC), under its director, Manjula Pradeep, began its campaign of the International Women’s Day, March 8, in Choraniya village of Limbdi block in Surendranagar district. During the campaign, which took place in a large number of villages of the district, the team interacted with several suffering women, young and old, as also school-going children, and was shocked to find unprecedented discrimination in Gujarat’s rural areas. Developmental work has not touched these villages, especially their Dalit areas. Dalit women feel further neglected and discriminated against.

Posted on March 10, 2015, in Uncategorized. Bookmark the permalink. Leave a comment.