Navsarjan Trust director and convenor of the Gujarat Women Rights Council Manjula Pradeep and other activists’ intervention, through rallies and representations, helped in ensuring that the death of the tribal lady police constable from Rajpipla — Vasanti Vasava — is registered as a case of probable murder instead of a suicide. Her brother, Raghuvir, steadfastly called it a clear case of sexual harassment and murder. The activists’ campaign, with the help of the tribals of the area, led to the arrest of the accused, Vijaysinh Deepsinh, who happened to work in the same police station. It became a matter of “major embarrassment for the Narmada police as the family members of the victim refused to perform the last rites and staged a protest demanding immediate arrest of head constable Vijaysinh Deepsinh and his wife”, reported Indian Express. See following links:

Photographs of the protest rally against failure of the police to act in a resolute manner:

Rally in memory of Vasanti 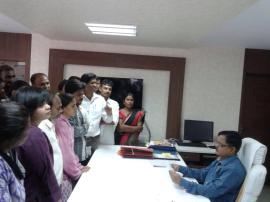 Representation in the district collector’s office

Posted on December 3, 2014, in Uncategorized. Bookmark the permalink. Leave a comment.