Against heavy odds, they chose path other than the one dictated by caste

Pushpaben of Nadiad, who decided to stop taking vadvu, a caste duty to begging for leftover food

Many manual scavengers ask for vadvu as a part of fulfilling their caste duties.  Vadvu is the act of going door-to-door and begging for leftover scraps of food from others’ home.  Instead of preparing their own meals, manual scavengers are taught from an early age to take old scraps from others’ households, hence increasing their dependence on the rest of society as well as their ‘lower status.’ Pushpaben had been asking for vadvu for six years, when eight months ago, Naginbhai, a Navsarjan fieldworker living and working in the same areas as Pushpaben, called a meeting with all of the manual scavengers in the area.  He reasoned with them about the importance of being strong enough to take charge of their own meals and explained the importance of being strong and not being dependent on others. Pushpaben was just one woman out of a number of manual scavengers who stopped asking for vadvu and began making their own meals that day.  Though Pushpaben continued to engage in manual scavenging work (in order to  singlehandedly support a family), she felt strengthened by the act of taking charge of her own family and by no longer begging from others. 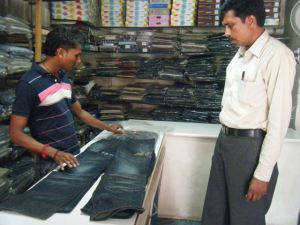 Maheshbhai, who worked as manual scavenger in Anand

Maheshbhai was born into the manual scavenging caste.  After studying up to the 10th standard, Maheshbhai began working as a manual scavenger in the city of Anand.  His job not only included cleaning, sweeping, and collecting trash, but also picking up human waste with his hands to clean the streets. “The work was dirty,” he recalls, “and I didn’t like picking up dirty waste.”  But with his caste and with both of his parents also engaged in the same work, he had very little choice in what he did. One year after beginning his job as a manual scavenger, he decided that he would no longer engage in that work.  He looked for jobs in the city, and after some searching found work at a clothing store. Maheshbhai began working full-time selling denim garments in the city of Anand.  He stopped engaging in manual scavenging work, and instead began to continue working in the new lines he chose. Maheshbhai’s parents continued to work in the same line of manual scavenging, as they have done for the past thirty years.  Yet, they were proud of their son for choosing a “good line” to work in. As for Maheshbhai, he hopes to build up enough experience working so that he can one day open up his own clothing store and sell garments on his own.

Hasmitaben, who worked as a manual scavenging child worker in Aslali village

Hasmitaben belongs to Aslali Village, located in Kheda district.  After completing her studies up to the 7th standard, Hasmitaben stopped going to school and began going wiht her parents to help them practice manual scavenging. Jagdishbhai, a member of Navsarjan’s manual scavenging campaign, met Hasmitaben and her family.  He started talking with the family to learn more about their concerns, and discussed options other than the manual scavenging they currently practiced. When Jagdishbhai learned about Hasmitaben’s situation, he reasoned with the family to put her back in school.  After Hasmitaben’s family realized how important it was for her to study, they placed her back in school to learn instead of putting her to work as a manual scavenger. This helped Hasmitaben to continue her studies.  She began enjoyed going to school and learning and left the work of manual scavenging aside in order to study and learn at school. 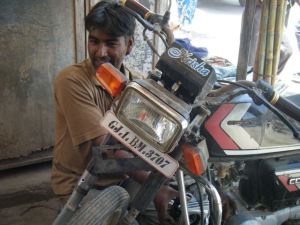 Rajeshbhai lives and works in Viramgam City.  Even though he was born into the manual scavenging caste and his entire family engages in this work, Rajeshbhai has rejected the occupational boundaries of his caste.  Instead, he recognizes the work of manual scavenging as “dirty” and refuses to engage in the practice. Rajeshbhai decided to set up his own motorcycle repair stand.  People from all over Viramgam and from all different castes would come to his stand to have their motorcycles repaired.  Rajeshbhai has enjoyed his work thoroughly and boasts of the ability to set his own schedule and make decisions on his own. Rajeshbhai also talks with his family about leaving the practice of manual scavenging.  He sets an example through his own life and hopes that the rest of his family will also choose alternative forms of livelihoods.

Madhuben, who used to clean manual waste in Limbdi

Madhuben lives and works in Limbdi City, located in Surendranagar District.  As a manual scavenger, Madhuben used to clean human waste from the streets and from dry latrines without any protective gear.  She would pick up the filth with her bare hands and remove it from areas throughout the city. Today, Madhuben no longer engages in manual scavenging works.  She continued to be employed as a sanitary worker, but was insistent in not working directly with human waste.  She worked hard to make ends meet through this salary, but remained strong within herself in terms of her own dignity and strength.

In Kumbharvard Village in Kheda District, the manual scavenging community is large, made up of over 100 homes.  Yet, not a single person in this village engages in the work of manual scavenging.  Even though the residents’ ancestors used to engage in manual scavenging, these individuals refuse to follow suit. Instead, the entire community has joined together and works on making and selling supras (an item used in the villages to sort through rice and grains.)  They sell these items to people from all different castes who no longer practice untouchability with this community of people.

Posted on February 9, 2014, in Uncategorized. Bookmark the permalink. Leave a comment.